On a recent tour, we stopped at Jack London Square in Oakland, in the Oakland Alameda Estuary, for lunch at Kincaid’s. Getting there was half the fun. From San Francisco we passed the Admiral’s house on Treasure Island, including his own light house on the south end of the Island.

The Coast Guard base there and the new sections of the Bay Bridge grabbed our attention as we made our approach in to Jack London Square, named for the accomplished author.

Jack London Square is a maritime center for lots of different boats and modes of transportation.   It is the home of restaurants, hotels, specialty stores and an Amtrak station.  Ferries go back and forth between San Francisco and San Mateo Counties all day long.   It enjoys an abundance of entertainment, boasting itself as center of the bay area jazz scene.  A farmer’s market is hosted among the retail shops on Sunday mornings.

A visit by boat to Jack London Square offers the sights and sounds of a unique historic location and the opportunity for lunch at an amazing restaurant, Kincaid’s.  On a recent visit, one of our guests enjoyed one of their Lavender Cosmos. There was also a Jumbo Prawn Cocktail with spicy aioli and a perfectly textured Lobster Bisque.  While we were there, everyone marveled at the view of San Francisco and the bridges.

Kincaid’s has a great wine list with a moderate price range.  At the higher end, they carry Silver Oak Cabernet Sauvignon from Alexander Valle and the Louis Roederer Brut Premier, one of my personal favorites.

There are some notable items on the lunch menu such as the French onion soup, the Chophouse Burger with Brie, and the Seafood Louie salad.  The dinner menu features a Seared Peppercorn Crusted New York Steak and a Pan Seared Shellfish Fettuccini.

As delicious as the food was, the view was what brought it all together. From the deck of the restaurant, we could see the San Francisco skyline across the water, framed by the boats docked on both sides and the crane of the port of Oakland.

On the weekends Jack London Square fills with one person sail boats, including dragon boats at the end of the summer preparing for the San Francisco Dragon Boat festival. The Estuary is a bustle of excitement on weekends.

Come join us for a cruise on a historic wooden Jackie O’ designed vessel into our own Bay Area history at Jack London Square.

Driving around the bay and looking out at Angel Island, it’s hard to imagine just how spectacular the views are from the Island.  It is all right there, from the San Francisco skyline to the Golden Gate Bridge, Mount Tamalpais, Sausalito, Tiburon, Richmond and Oakland. On a clear day, you can see as far north as Sonoma and as far south as San Jose.

Angel Island was originally a fishing and hunting site for the Coast Miwok Native Americans, Angel Island has been home to cattle ranchers, immigrants, and a camp for the U.S. Army starting at the time of the Civil War. Remnants and relics of wars gone by remain, from the Civil War to the Cold War.

As you walk the perimeter road around the island counter clockwise, the first landmark is West Garrison and Camp Reynolds. Originally constructed at the time of the Civil War, this outpost was built to defend San Franciscans against Confederate soldiers and foreign attacks. It was used as overflow housing for U.S. Troops through the end of World War II.

A little further up the road the view of the Golden Gate Bridge, Alcatraz, and the San Francisco skyline bring you back into the present, in awe of the beauty of the bay.

The next landmark is the Nike Anti-Aircraft Missile Site. Although Angel decommissioned as a military post in 1947, in 1954 missile magazines were constructed on the islands southeast corner above Point Blunt as well as at the top of what is now called Mount Caroline Livermore.

Once upon a time this missile site was part of our front line defense for incoming missiles. Today this vacant launch pad serves as a reminder of the Cold War.

One of the final sites to see as one tours the island is Immigration station, where countless Chinese immigrants were held as part of the Chinese Exclusion Act of 1882. Until immigrants could prove that they had husbands or fathers who were U.S. citizens they remained on the island or were subject to deportation. The walls of the station are covered with poems in Chinese of detainees, both heart wrenching and beautiful. Though there were immigrants from a total of 84 different countries, approximately one million of these were Chinese. In 1943 the Exclusion Act came to an end when China became our partner in World War II.

At that point, there were numerous prisoners of war held on the island, though they were given free roam.

The combination of the scenery and the history of the island make it one of the most amazing hikes that the Bay Area has to offer. 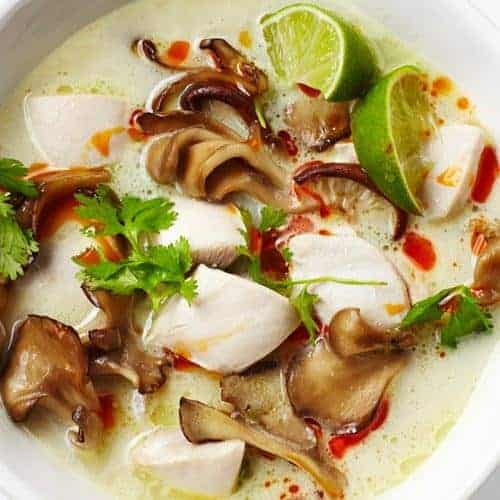 One of the biggest hits from our galley on board Just Dreaming is our Tom Kha Gai soup. Also known as Thai Chicken Coconut Soup, this dish is flavorful, delicious, and exotic. It is a perfect dish on the yacht when the cold wind kicks up.

“Tom Kha Gai Soup” literally means “chicken galangal soup.” It is based on the 19th Century Siamese recipe, Tom Kha, a dish of chicken or duck served in a coconut broth flavored with galangal, a spice in the ginger family with hints of citrus and sweetness. It was then paired with a chili jam, similar to sweet chili sauce. Moving into the 20th century, the dish morphed into Tom Kha Gai, a mainstay in Thai and Lao cuisine.

The main ingredients are coconut milk, galangal, lemongrass, kaffir lime leaves, mushrooms, and chicken. It can be mild and delicately spiced or set your mouth on fire spicy. We will make it to your liking.

When we first had it, we were sitting on the deck, watching the sunset just approaching the Golden Gate Bridge. It was awe inspiring. With the beauty of the ocean, the hills, the bridge, a slight breeze, and the delightful spice and warmth of the soup, we found ourselves completely in the present, all of our senses engaged.

It made for a perfect escape from the day to day. And as we wound back around the bay, passing Angel Island, Sausalito, and back toward the city, we enjoyed the glory of the skyline, the pleasure of each other’s company, our friends and family: the crew of Just Dreaming.

There really is nothing like the smell of ocean air, the view of the bay, the feel of the breeze in contrast with the smells, taste and warmth of the soup. The powerful combination brings you right into the present. This is living!

On your next trip onto the bay with us, order it in advance, or any of our custom menu options.