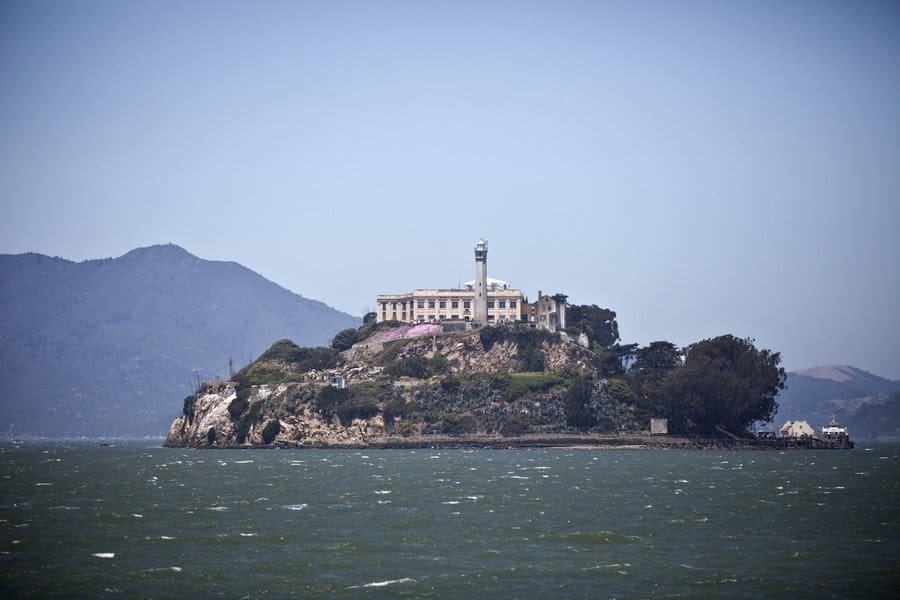 About once a month we spot swimmers crossing the Bay from Alcatraz Island as we take our guests on a tour of the bay. They always ask about them. We’re proud to tell them about a few of our crew members making the journey as part of the “Take the Rock ” Veteran Swim Challenge in the Fall, open to veterans from every branch of the military, which is one of many annual Escape from Alacatraz style events. 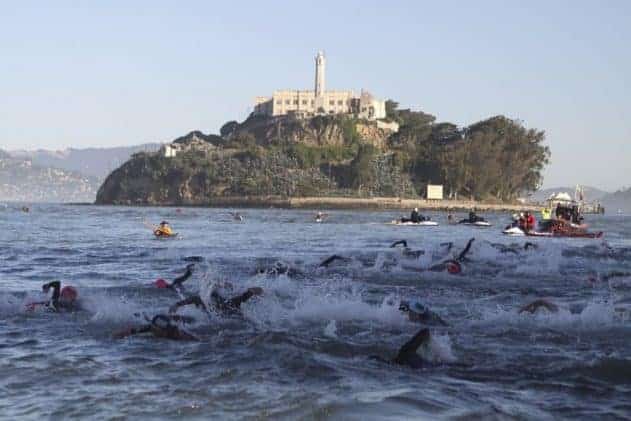 Of course, that opens the conversation to the best-known escape from Alacatraz. It was carried out by Frank Morris, John and Clarence Anglin, and Allen West on June 11, 1962. Seeing the swimmers gets our parties talking about this famed event, from the intricate details of the Papier Mache heads they made to place on the beds to buy time, to the letter received by SFPD in 2018 from John Anglin, postmarked Brasilia.  We love getting to talk about the history of the island and the many recreations from Mythbusters to the 1979 film with Clint Eastwood. 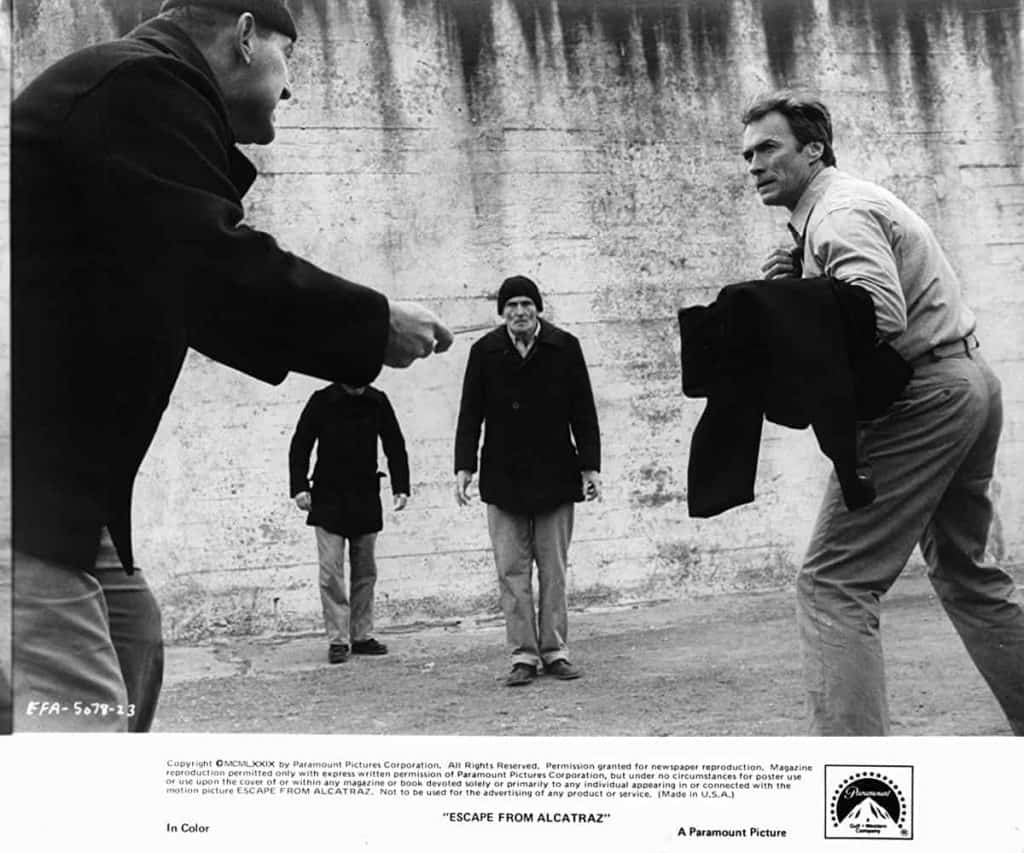 We tell our parties that now, 45 years later, any well-trained swimmer can recreate the escape from Alcatraz. This always comes as such a surprise. After years of hearing about so many failed attempts, learning that so many people have done the swim lends credence to the tale. And, of course, this sighting is only one of many as we cruise the bay. From San Francisco to Tiburon to Alcatraz to the Golden Gate Bridge and back, our guests always have a great time on board Just Dreaming Yacht. 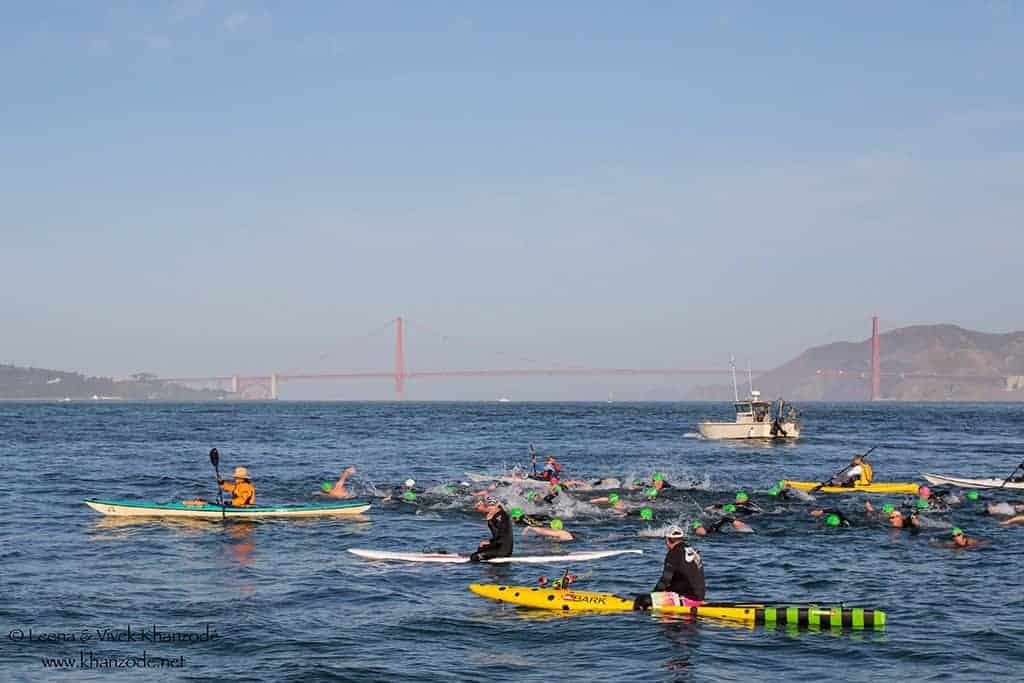 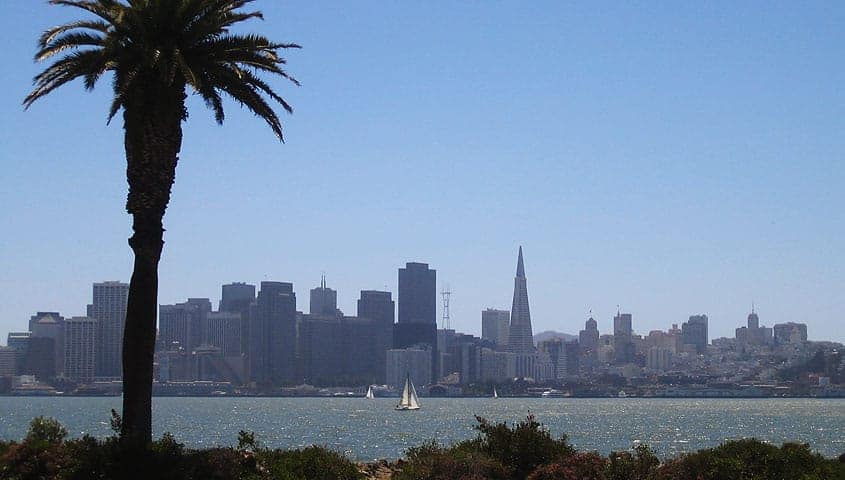 Come Visit the Wineries of Treasure Island with Us

A few weeks ago, we had the pleasure of bringing a small group of executives out to Treasure Island for an afternoon wine tour with Just Dreaming. It was a gorgeous afternoon, so gave them the grand tour, cruising out toward the Alameda Estuary, giving them an up-close view of the cranes of the Port of Oakland, before making our way under the Bay Bridge and over to the dock. 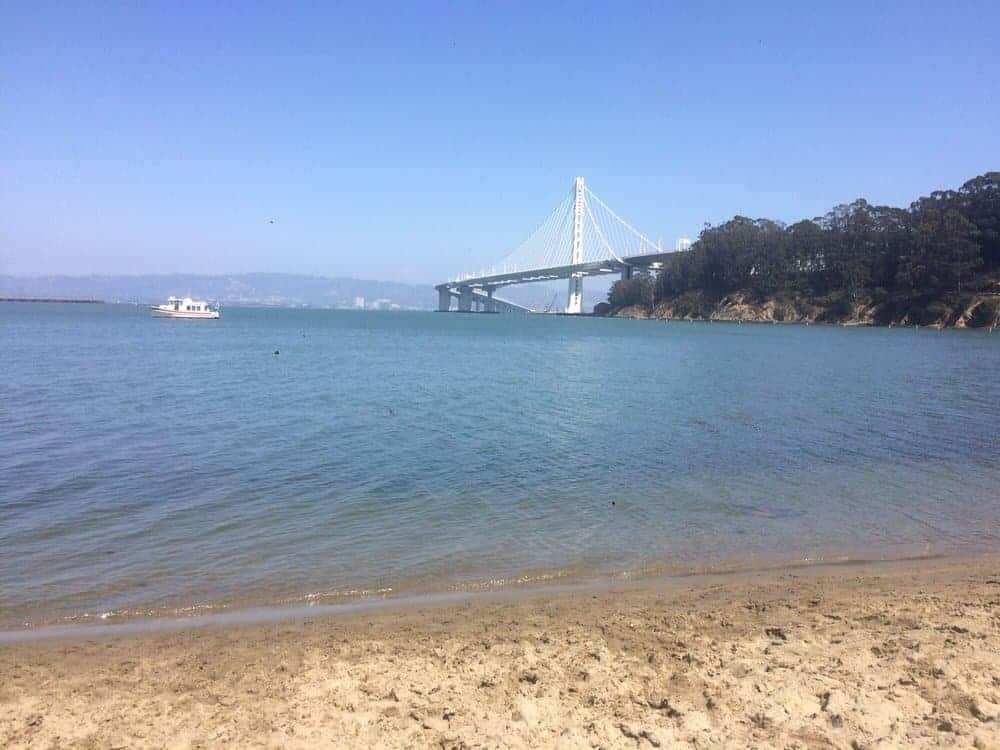 After docking at Clipper Cove Way, we walked them over to The Winery SF. They loved the vast industrial space, with wine barrels lining the walls. More than that, they were wowed by the Viognier, a Gold Medal winner in the San Francisco Chronicle Wine Competition. We were close enough to the boat that they bought several bottles and took them back to the boat.

From there we showed them the views of the Bay Bridge, walking alongside the water before turning up on Avenue I to visit the island’s original winery: Treasure Island Wines. Originally founded as a collective in 2007, the grapes are sourced from all over California with all phases of wine production are performed on-site. We were surprised at how much their faces lit up when they saw all of the dogs. The tasting room at Treasure Island Wines isn’t just dog friendly. The tasting fee is waived if you bring your dog. Perfect!

The highlight of the tour for them may have been Fat Grape because of its unique location and sulfite-free wines. Fat Grape is located inside the former Navy Brig, an ironic and unusual setting for merriment. 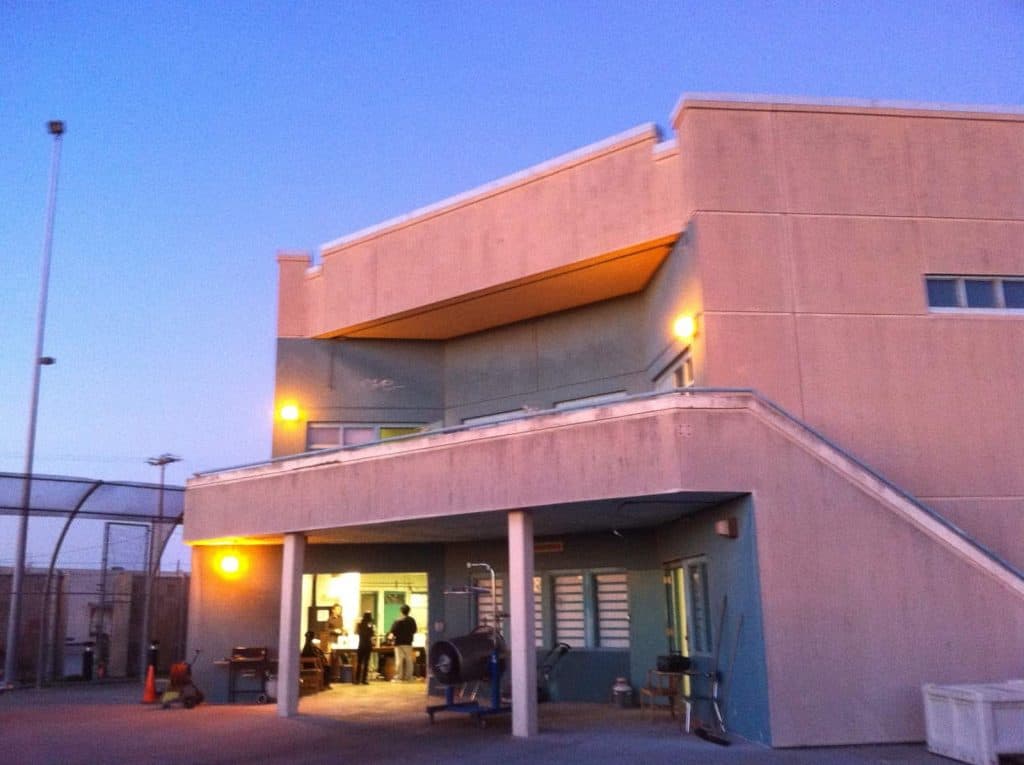 Or, it may have been Sottomarino Winery, or “submarine” winery. Sottomarino features Italian style wines, such as Sangiovese, served on board the USS Buttercup, a former World War II submarine training vessel. Though landed and renovated, many of the original details remain, including the escape hatch. 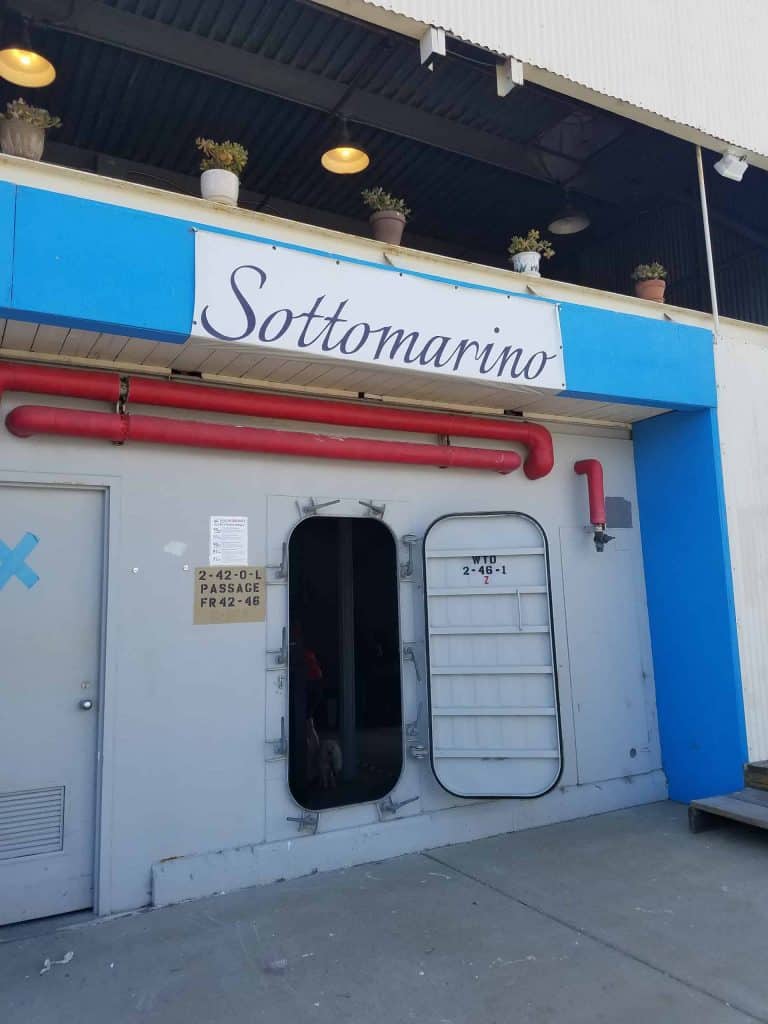 Wrapping up our tour, we headed back to Sol Rouge, the tasting room for the Napa Valley Winery, where they played Bocce Ball, glasses of Cabernet Sauvignon in hand, admiring the beautiful view of the Bay Bridge in the background.

There was so much more they didn’t get to see! While they positively loved the tasting rooms, there were more they didn’t get to try along with so many historic buildings to see, not only those built by the Navy, but a few built for the World’s Fair in celebration of the completion of both the Bay Bridge and the Golden Gate. As they left, they realized there was even a spot for to drop anchor and spend the night.
What a way to spend a weekend after meetings in the City. Join us!

A favorite destination for Just Dreaming on the Bay is the Trident in Sausalito. It is one of the most romantic spots overlooking the gorgeous city skyline, Angel Island, and the East Bay. We’ve taken many a party there, we’ve been lucky enough to celebrate everything from graduations, to birthdays, anniversaries and romantic dinners. Everyone we’ve taken there absolutely loves this place!

First, we dock right at the restaurant. Walking into the Trident, is a walk back in time with its curvaceous wooden features; archways and booths decorated with deep dark brown wood slats; psychedelic murals painted on the walls and the ceiling. And, we’re always greeted with a smile.

The food is amazing! They offer a wide variety from steak, to fish, to mussels with chorizo. Guests often rave about their Pan Seared Jumbo Sea Scallops, the Petrale Sole Picatta, and the Vegetarian Strudel. So delicious…
You can also ask the host for the historic tour. In keeping with the original mission of the restaurant from the time it was opened by the Kingston Trio in 1966 everything is locally and sustainably produced and the service is top notch. For those that don’t remember, they were a top of the charts band at the forefront of the hippie revolution. Here’s a look at the original menu, prominently placed near the entrance of the restaurant.

From there, our host showed us the private entrance Janis Joplin once used, filling us in on the crazy parties thrown by the Rolling Stones on their 1972 “Exile on Main Street” tour. One of the original bartenders, Bobby, served Mick Jagger one of his own concoctions, the Tequila Sunrise, and he was hooked. And so, the Tequila Sunrise was born.

Our host ended the tour by walking us up the stairs to Ondine. With one of the most spectacular waterfront views in the Bay Area, Ondine is a unique private dining venue specializing in upscale Modern American Cuisine. The setting is described by most as being undoubtedly the most desirable location in Northern California. With panoramic views of San Francisco, Angel Island, Alcatraz and the Bay Bridge. They were setting up for a wedding party when we did our tour. Maybe we’ll get lucky enough to help one of our charters with their own wedding.